Some Key Figures in the Story of San Clemente 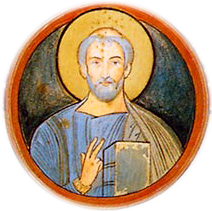 Very little is known about the life of St Clement (92-101 AD). According to the oldest list of Roman bishops, he was the third successor to St Peter in Rome.

He is the author of an Epistle to the Corinthians which was written c. 96 AD in the name of the Church of Rome to deal with disturbances in the Church at Corinth.

The letter is one of the earliest witnesses to the authority of the Church of Rome and was so highly regarded that it was read publicly at Corinth with the Scriptures in the second century.

St Clement is revered as a martyr: fourth-century accounts speak of his forced labour in the mines during exile to the Crimea in the reign of the emperor Trajan (98-117 AD) and his missionary work there which prompted the Romans to bind him to an anchor and throw him into the Black Sea.

Sometime later, the accounts continue, the water receded, revealing a tomb built by angels from which his body was recovered.

The relics of St Clement are reserved beneath the high altar of the basilica and on 23 November, the Feast of St Clement, they are exposed for veneration and carried in solemn procession through the neighbouring streets. 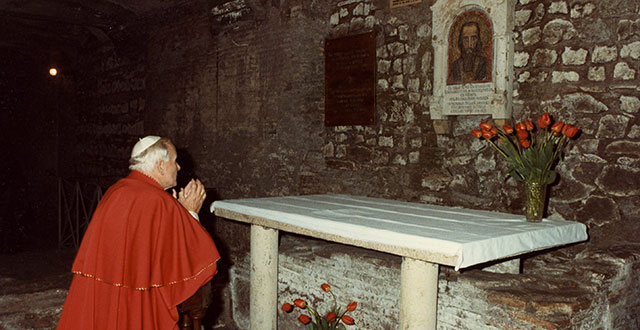 “The Holy Brothers of Thessalonica highlight first the contribution of ancient Greek culture and, subsequently, the significance of the influence of the Church of Constantinople and of Eastern tradition, which has so deeply marked the spirituality and culture of so many peoples and nations in the Eastern part of the European Continent.”

Selected by the Byzantine Emperor Michael III in 863 for a ‘cultural and religious mission’ requested by the King of Moravia, these two brothers from Thessalonia began to teach and preach in the Slav language. St Cyril, a brilliant linguist, devised an alphabet, thus becoming the founder of the Slavonic literature. He also adopted Slavonic for the celebration of the liturgy, and circulated a Slavonic translation of the Scriptures. According to St Cyril’s own report, in 861 AD he recovered the body of St Clement in the Crimea, together with the anchor. Invited to Rome in 867 AD by the Pope, SS Cyril and Methodius took these remains with them, arriving in 868 AD. The body of St Clement was solemnly escorted to and interred in San Clemente. A year later on 14 February St Cyril died in Rome. St Methodius asked for permission to take the body back to Greece. When the Pope and people of Rome would not allow this, St Methodius requested that the burial be in San Clemente itself. During the French revolution the relics of St Cyril were placed in safekeeping and eventually were lost. In the 1960s the Irish Dominican Fathers discovered a small fragment of the relics. Pope Paul VI personally placed this fragment in the Basilica di San Clemente in the hope ‘that the sacred relics of St Cyril might be a cause of union with the See of Rome.’
Fr Joseph Mullooly, O.P. 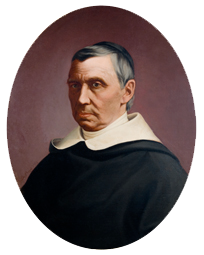 Fr Joseph Mullooly, O.P., was born in County Longford (Ireland), on the Feast of St Joseph, 19 March 1812, a son of Gilbert Mullooly, a farmer, and his wife, Bridget Dowd. In 1840 he set out for Italy, where he entered the Dominican Order on 7 September 1841. A year later he made profession and within three more years was ordained a priest.

Assigned to San Clemente in 1846 by the Master General of the Order, he obtained the degree of Lector in Sacred Theology in 1849 at the Convent of Santa Maria sopra Minerva (Rome). The following year, Fr Mullooly became superior of San Clemente and remained so for the rest of his life, two brief periods excepted.

In 1857 he began excavations under the present basilica and within ten years had brought to light a fourth-century Christian basilica and an even earlier level, one that reached back almost to the time of St Clement himself. The discovery of the Tomb of St Cyril in 1863 earned Fr Mullooly the perennial gratitude of all those who owe their Christian faith and culture to the Apostles of the Slavs, SS Cyril and Methodius.

His own confrères demonstrated their appreciation of Fr Mullooly in 1873 when the Irish Dominicans petitioned the Master General to award him the honorary degree of Master in Sacred Theology.

Fr Mullooly was also a celebrated author. In 1869 he published St Clement Pope and Martyr and his Basilica in Rome. In the same year his Brevi notizie delle antiche pitture discoperte nella basilica sotteranea di San Clemente was published in Italian, French and English while his English translation of E. Cartier’s biography of Fra Angelico, Life of Beato Angelico de Fiesole of the Order of Friars Preachers, appeared in 1865.

Weakened by malaria and pleurisy, Fr Mullooly collapsed after Mass on 20 June 1880. He died five days later in his room in San Clemente and was buried in Campo Verano. In 1912 his remains were returned to San Clemente where they now lie beneath the High Altar of the Lower Basilica. 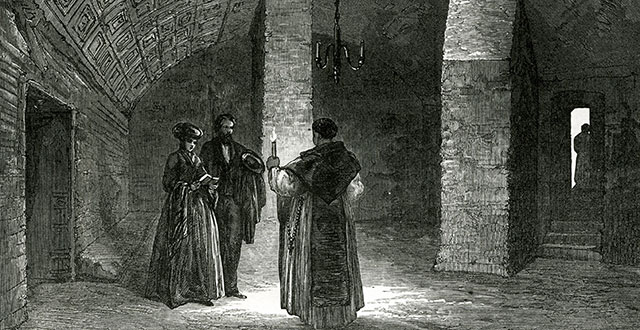 In 1403 a monastic community began to serve San Clemente when Pope Boniface IX introduced the newly-founded Augustinian Congregation of St Ambrose (1379) from Milan. The basilica remained in Ambrosian hands until 1643, when Urban VIII suppressed the whole congregation.

In 1645 the Dominicans of San Sisto Vecchio (Rome) were put in as caretakers by Camillo Pamphili, the Cardinal-nephew of Innocent X, the whole property being handed over to the Dominican Order in 1667.

Ten years later, because of religious persecution in Ireland, the basilica and convent of San Clemente, together with those of San Sisto Vecchio, were granted to the Irish Dominicans who have continued to administer the basilica, live their religious life and continue the excavations they first started in 1857.